The relationship that has existed between Canadian machine manufacturer Husky Injection Molding Systems and control system supplier Beckhoff for roughly 20 years is a rarity these days, and Husky recently underscored this by honouring Beckhoff with its EMEA Supplier Award at the K 2019 trade show held recently in Germany.

When Husky chose Beckhoff as its control systems supplier in 1999, the renowned company was ready to step off the beaten path and work with a pioneer in the area of PC-based control technology. Beckhoff was still a relatively young and small company at the time, so Husky’s decision was not without risk.

That the company decided to move forward with Beckhoff may have been based in part on individual rapport, but most of all on Husky’s trust in the trailblazing potential of the PC-based control philosophy of Hans Beckhoff. 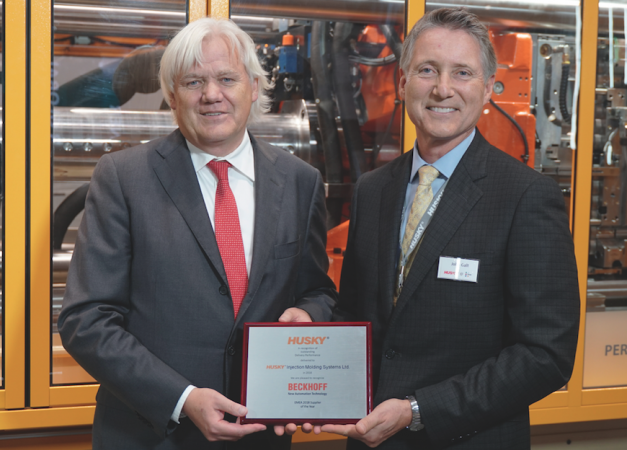 John Galt (right), president and CEO of Husky Injection Molding Systems, presents the “EMEA Supplier of the Year” award to Hans Beckhoff, managing director and owner of Beckhoff Automation, in October 2019 at the K show in Düsseldorf, Germany.

The openness of the Industrial PC platform, which was based on Windows standards, and the clear separation between software and hardware opened up a new world of competitive benefits for Husky. PC-based control replaced Husky’s legacy control concept, which was based on a multitude of dedicated controllers and PLC hardware, with a single Industrial PC and TwinCAT as an integrated software platform.

During the development phase, it quickly became apparent that Beckhoff, with a strong innovative spirit, was the perfect match for Husky as the technology leader in high-performance injection molding machines. Husky’s technical challenges subsequently led to technological improvements and the development of new Beckhoff products. A prime example of the close co-operation between Husky and Beckhoff are advanced temperature sensor modules, which can be mounted directly on the injection molding machine without any special cables.

After a successful trial phase, Husky went into series production with Beckhoff control systems and declared them the standard for its entire machine portfolio. In 20 years of continuous cooperation, various generations of PC-based control systems have been installed in Husky machines as a result. Husky was also one of the first companies to rely on the fast EtherCAT standard introduced to the market by Beckhoff in 2003.