Buying a new robot is a considerable investment for any business owner. Collaborative robots have been widely marketed as a cheaper alternative to industrial robots, but what’s the catch? Nigel Smith, president and CEO of Toshiba Machine partner TM Robotics, explains the crucial differences between these two robot types.

Let’s kick things off with the collaborative robot, or ‘cobot’ as they are commonly called. The term cobot has been coined to represent an unguarded, easy to integrate collection of robots that typically carry out repetitive or unsafe tasks while the human workforce performs higher-value manual tasks up or downstream. In terms of upfront costs, most cobots are cheaper than traditional, industrial robots.

These low costs have provided smaller businesses with accessibility to robots, which in itself is something to be celebrated. However, that doesn’t mean all small businesses need to opt for a cobot to board the automation train.

The alternative is industrial robots. Think SCARA, 6-axis or cartesian models. These are heavy duty robots with high payloads that can tackle dangerous, repetitive and heavy applications. These robots are commonly used for parts assembly, pick and place and palletizing in many different industries — and they have been for decades.

TM Robotics’ is a good example of this. The company’s new pricing structure puts the company’s range of Toshiba Machine SCARA robots as the performance leader of the low-cost end of the market. The company’s latest SCARA model for instance, the THE400, can provide manufacturers 40 per cent faster speed compared with competing models in this price range.

Using this model, the company can ensure small businesses and those that are new to automation, aren’t priced out of the robot market.

Whether we’re discussing cobots or industrial robots, a challenge for small to medium sized manufacturers is determining the actual cost of ownership when investing in automation. These are the additional costs of maintenance, energy consumption and additional equipment requirements that enable the safe usage of the robot.

For example, a risk assessment may determine a cobot needs extra fencing, or force limiters, if it is to be used safely alongside humans. This is a very common occurrence for misinformed cobot purchasers. Manufacturers would be forgiven to believe that cobots are automatically safe to use alongside humans, but this isn’t always the case.

The risk assessment, and the heavy fees for additional safety equipment, can leave manufacturers thinking, ‘why didn’t we just buy an industrial robot for all this money we’ve spent?’ 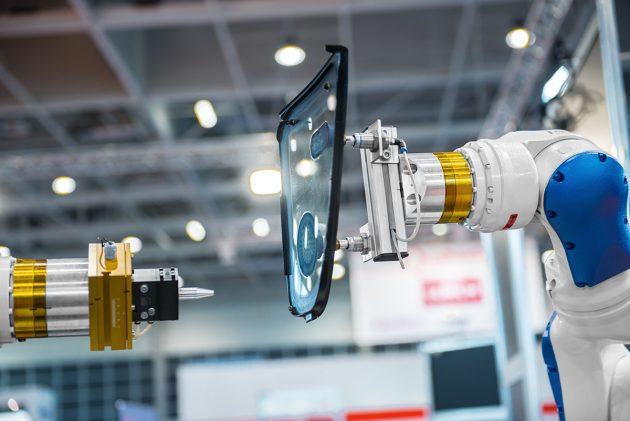 Cost of energy consumption also needs to be evaluated against the production output. As many cobots are relatively new inventions, many boast low energy consumption. But, you wouldn’t celebrate a cobot only using 800 watts of energy, if it only outputs one unit during that time. Similarly, you can forgive an industrial robot for using 3,000 watts of energy in the same time period, if it outputs a large number of units.

According to TM Robotics’ Global Robotics Report, 79 per cent of robot distributors stated that simple programming was one of the most important things customers were looking for when purchasing a robot.

By nature, cobots are designed for ease-of-use alongside human employees. In fact, one of the most marketed features of these machines is ease of programming.

Easy robot programming is not only an attractive feature for new users, but provides established users with reduced programming time. Growing demand for easily programmable robots is particularly evident in the rapid increase in sales of collaborative models.

Cobots are known for their ease of use, some having intelligent hand-guided teaching ability, where the operator simply teaches a cobot a new program, by moving the robot manually.

On the other hand, industrial robots have developed an unfair reputation of being labor intensive, in relation to programming. That’s not to say some aren’t, but when you test the usability of Toshiba Machines latest robots and programming software, it’s clear to see this isn’t always the case.

We’re witnessing a shift in behaviour from robot manufacturers in favour of easy to program industrial robots. This is particularly advantageous for small to medium-businesses that are perhaps new to automation, but don’t have the expertise in house for complex programming.

There’s an argument for both industrial robots and cobots, but the decision on which to select depends on the application. While industrial robots are shifting some long-standing misconceptions on programmability and costs, the collaborative robot is also being held to higher standards in relation to return on investment and productivity.

There’s space on the market for both industrial robots and cobots. The question is, which one is worth your investment?