For equipment designers in processing industries, there are aspects of any system that are more functional in nature, yet still critical. This includes gas, fluid and chemical handling systems that play an integral role in equipment that extracts, dispenses, blends, controls temperature or some other aspect of control.

For these aspects of the system, OEMs face a critical business decision: whether to fully engage as a manufacturer, or to outsource certain or all aspects to trusted, qualified contract manufacturers.

By doing so, they expect to control and even lower production costs.

However, even within the category of contract manufacturing there can be a broad range of capabilities. Some shops focus solely on build-to-print projects, often in niche categories such as piping or sheet metal work. On the other end of the spectrum are companies that offer a more diverse range of capabilities, complete supply chain management and engineering services.

According to Jason Medhurst of Aztech Controls, even companies that decide to outsource may not have the in-house expertise to assemble and, in some cases, complete the drawings for a system or execute the required change control.  For this reason, there are benefits to more of a full-service approach that includes engineering.

“The truth is OEMs don’t always know how much engineering and design support they actually need,” says Medhurst.  “They’ll ask us to build a system and say, ‘we’ve engineered it for you’ and when we get in there we discover the design is in its infancy.

“In other cases, we receive well-developed drawings and the engineering requirements are minor. Then, we might help them with supply chain management,” Medhurst adds, explaining that this can include sourcing, purchasing and holding in inventory all the individual component parts of the system. 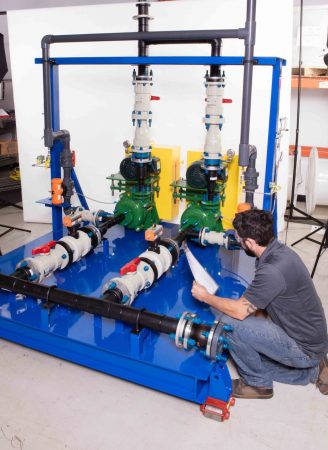 With this type of support, OEMS are truly free to focus on higher revenue, proprietary aspects of their system.

“The moment the OEM starts retaining pieces of the project, they are not fully utilizing everything a contract manufacturer can do for them,” says Medhurst.  “Then they end up still being part of the project they are trying to offload.”

For large OEMs, outsourcing frees up a valuable resource: time and attention. The ability to offload some of the “detail work” allows key personnel to concentrate on more important functions such as client relations, scheduling and managing the budget.

“Outsourcing opens up a lot more time for me to focus on other areas of the project instead of having to worry about some of the minor details that eat up valuable time,” says Tony Harlan of Kurita America.

Given the nature of water treatment systems, no two completed systems are exactly alike. As a result, every system must be engineered to meet the requirements of the individual client.

However, to create these systems it is standard practice for companies like Kurita America to outsource aspects of the mechanical, electrical and control system to subcontractors.

“Typically, we would purchase all the valves, pumps – whatever was going on that skid – and only ask the fabrication shop to do the assembly,” says Harlan.

There were several motivations for this approach, including the belief that purchasing the parts would ensure the best price without the usual mark-ups.

However, this logistical work came with additional costs that often were not considered. This included the time and effort to create each purchase order, deal with invoices, manage and store parts inventory, ensure it was shipped properly and arrived as scheduled at the fabrication shop, and deal with any necessary returns.

So when Aztech Controls pitched Kurita on the concept of building the entire system for them, including sourcing all the components, they were intrigued.

Aztech Controls was originally founded in 1986 as a distribution and rep company for products used for wastewater and other processing industries.  Today, the company offers full engineering and manufacturing capabilities to build-to-print or design and build complete systems from scratch.

Kurita felt that the company’s long history as a distributor in the industry gave them confidence Aztech Controls could source the parts at a reasonable cost.

“It was an extremely smooth and thorough process,” says Harlan. “The quality of the system was excellent, there were no issues whatsoever, which is why were interested in working with them again.”

Based on the success of the project, Harlan says that in the past year, Kurita America has worked with Aztech Controls to produced six or seven additional skid-mounted subsystems.

Retired engineer David Radnich says this project is a bit of a rarity in the industry – a just-in-time chemical blending and delivery system.

The project was part of a cost-cutting initiative to eliminate the need to purchase a very expensive chemical blend for a large semiconductor chip manufacturer. The company had determined it could save a lot of money by blending the chemicals on site, since the three constituent chemicals were not expensive.

Radnich was asked to participate on the team that would design and build a prototype system from scratch.

“They didn’t have the bandwidth to build advanced systems like that completely in house,” explains Radnich.  “They certainly could do it, but they want to run more of a streamlined operation, so for a one-off like that, better to go to a trusted source.”

After working up an initial design concept, he contacted Aztech Controls. Working together, the two groups quickly completed the design and the contract manufacturer then proceeded to build the entire system at its facility in Arizona.

Radnich was impressed that the prototype was completed in only a few weeks.

“They built an extremely cost-effective prototype unit and were able to integrate it into our system very quickly; I’m talking a few weeks, not months,” says Radnich.

Radnich says the prototype was tested over six months and “it worked flawlessly.”

The next step was a full scale version of the system. Aztech Controls delivered it in six weeks, as opposed to the typical lead time of six months to a year from other vendors.

“Many of the vendors of large scale systems are proven, but extremely expensive and have long lead times,” says Radnich.  “Also, the operational costs of the systems can be quite high and a lot of these systems have capacity constraints. 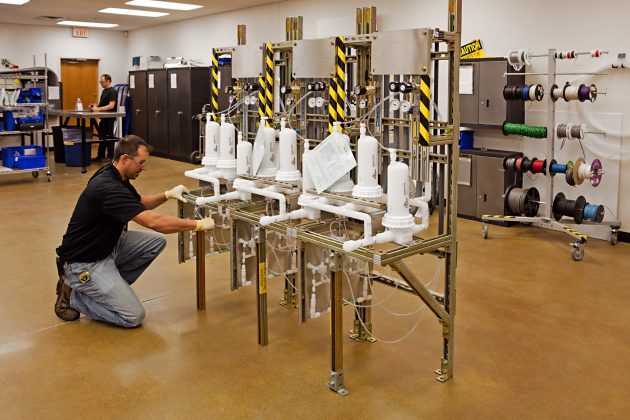 A worker checks out the unit.

“The system from Aztech Controls literally had no capacity constraints, no scheduled invasive PMs and the cost of ownership once it was running was almost nothing,” adds Radnich.

Radnich says the system that Aztech Controls designed and built not only fit the application requirements, but went well beyond technological expectations.

“The chemical blending system was truly state-of-the-art, next generation,” says Radnich. “Actually it skipped a couple generations it was so advanced, compared to what we had been using.  We couldn’t have done it ourselves.”

To date, the system has been working for six-to-seven years without any issues, which he calls “astonishing” for that type of equipment. The project was also a success in terms of the cost savings the company was hoping to achieve.

“It was a cost savings, from an equipment standpoint, installation standpoint and operational standpoint,” says Radnich.

Jeff Elliott is a Torrance, Calif.-based technical writer. He has researched and written about industrial technologies and issues for the past 20 years.