It all started in an artificial tooth factory

“I am so excited to reach this 175-year milestone alongside a management team with some of the brightest people in the business and fiercely loyal and proud workers,” said president and CEO Rahul Shukla. “The entire team is completely devoted to providing tremendous expert technical support to customers in the projects they undertake.”

Where it all began

Founded by Dr. Samuel Stockton White in 1844 as an artificial tooth factory and growing to become the largest dental manufacturing company in the world, the company patented high-speed flexible shafts used in its White dental engines in 1874. The unique flexible shaft technology later became the company’s focus, used in numerous industrial and automotive applications.

During the Second World War, S.S. White flexible shaft technology proved itself in the air as a critical component in U.S. military aircraft, enabling effective navigation even during tight maneuvering and poor weather conditions. 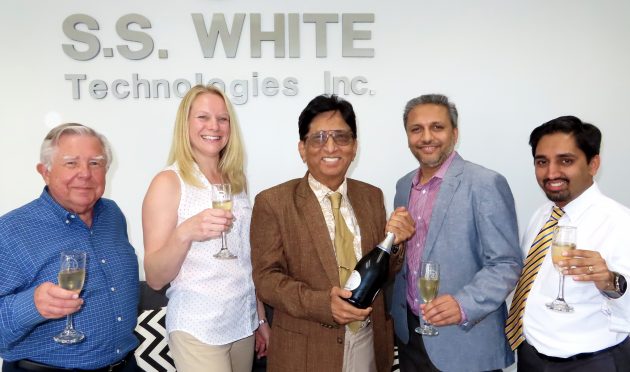 Shukla began his career at S.S. White as a full-time summer quality inspector in 1973, working his way up to draftsman, methods engineer, manager of industrial engineering, and later to director of research and development.

In 1990, S.S. White released the proprietary PERFLEXION software, which allows engineers to fully model the behaviour of all wires within a shaft and optimize for flexibility while minimizing torsional deflection with 20-30 per cent improvement over industry standards.

S.S. White flexible shafts are used in 98 per cent of aircraft flying today, numerous surgical instruments, cutting edge industrial applications, and millions of automobiles. The company’s flexible shafts are on the space station and have gone to the moon.