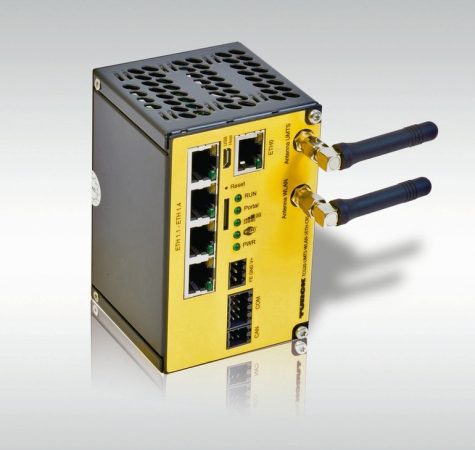 At this year’s SPS IPC Drives Fair, Turck will be presenting universal IoT wireless gateways for the wireless connection to cloud solutions. These enable machines and plants as well as measuring points at remote locations to be integrated simply into automation networks. With its extensive range of interfaces on offer, the TCG20 Series is specially tailored for the requirements of industrial automation.

Three wireless variants are available: with UMTS, dual-band Wi-Fi as well as simultaneous UMTS and Wi-Fi. The range of networks and protocols is even greater in terms of automation infrastructure: The TCG20 Series thus offers a serial RS232/RS485 port, a CAN port and up to five Ethernet ports. Besides CANopen, the devices also support Modbus TCP as well as Modbus RTU as master and slave, OPC UA as a client and server as well as Codesys network variables.

The integrated web server enables the gateways to be configured online at any time using clearly designed graphical menus and also without any programming knowledge. An EDGE-PLC Editor manages simple controller tasks and also the preprocessing of data for cyclical or event-driven data transmission. Mobile phone costs in UMTS operation are thus kept within reasonable limits.

The wireless gateways of the TCG20 Series extend Turck’s offering of Turck Cloud Solutions presented this summer. The entire cloud concept has a similar variable structure as the gateways and is also optimized for the special requirements of industrial automation.